Healthy Ireland is a Government-led initiative which aims to create an Irish society where everyone can enjoy physical and mental health, and where well-being is valued and supported at every level of society. Overseen by the Department of Health, the initial framework was launched in 2013, with a campaign promoting the the 3 pillars: Healthy Eating, Physical activity, and Mental Well-being launching in January 2018.

This post will objectively examine the Healthy Eating pillar, and the specific guidelines contained within it. At this point, it should be explicitly stated that this is not intended to be a defamatory or criticism of the Department of Health's attempt to promote overall health in Ireland. A campaign like this is badly needed to raise awareness and take action against the health crisis facing the country. Ireland is unfortunately set to become the most obese country in Europe by 2030. This will have only negative effects on physical health, mental well-being, and as a 2014 study by NUI Galway highlighted, the rising economic cost of an unhealthy population. 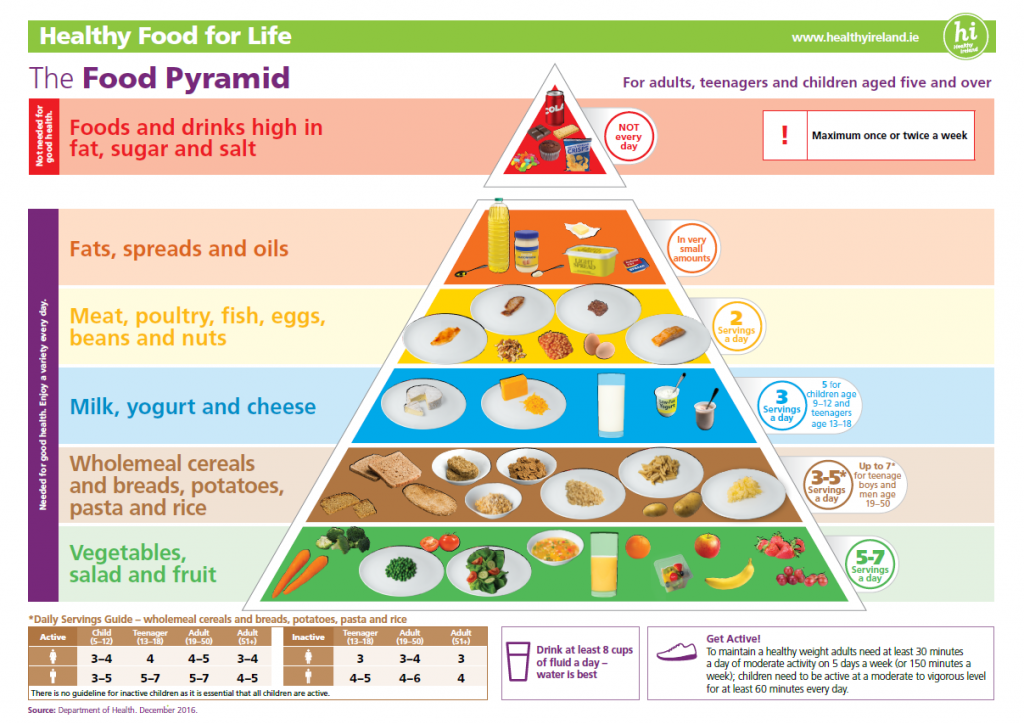 The eating guidelines on the healthy Ireland site centre around a revised food pyramid, pictured above. The first ever food pyramid was conceptualized in Sweden by a retail - grocery co-operative in 1972. This is instantly alarming as it was created by an organisation who aim to promote commercial interest in groceries and sales, not human well-being. However, the initial framework was actually reasonably neutral (by today's standards) in terms of dietary recommendations. It was non-specific and contained only whole, unprocessed foods. Of course, it did contain eggs, meat and dairy, but not in the quantities we see today.

The revised food pyramid here is based on the US food pyramid, first revealed in 1991. The information contained in the pyramid was not based on credible, peer reviewed, nutritional science from dietitians, nutritionists, or nutritional scientists. It was created by the US Department of Agriculture, an organisation whose mission includes "the strategic marketing of agricultural products in domestic and international markets". As a result, the commercial interest prevailed and meat, eggs, milk, processed carbohydrate (including processed sugar) laden diets were taught to an entire generation of school children and adults as "healthy eating". The introduction of the food pyramid actually caused obesity to skyrocket, making it the best strategy to implement in order to nurture an obese population. Despite growing awareness of the negative health implications of using this nutritional framework, industry influence still heavily shapes nutritional guidelines today.

Putting aside the fact that the pyramid framework is flawed by design, the guidelines for each of the 5 levels are examined below. One should note while reading that this pyramid framework will be taught to every schoolchild in the country; be present in most doctors practices nationwide, and ultimately shape the health destiny of coming generations of Irish citizens:

Fruits and vegetables forming the base of the pyramid is correct, as they should make up the bulk of any healthy diet. However, 5-7 should be increased to perhaps 9-11, or as many as possible. Louise Light, a nutritionist who worked on the original food pyramid guidelines before industry and lobbyists had their say, stated that a base of at least 9 servings of fruit an veg a day is required.

Potatoes and rice, both wholefood carbohydrate sources, are incorrectly grouped in the same category as processed carbohydrates in the form of pasta, bread and cereal. both contain the 5 key elements of a whole food; whereas wholemeal pasta and bread, while much healthier than its white counterparts, has lost its phytonutrient content in production. Potatoes and rice should be eaten over wholemeal bread and pasta where possible.

Dairy products are made with cow breast milk. They contain the protein casein, which has been linked to several cancers and is considered to be the most carcinogenic substance we consume. Milk was once believed to strengthen bones, but no scientific evidence exists to support this health claim. In fact, the opposite effect has been shown. With no proven health benefits, and proven negative effects, milk should be excluded from the healthy human diet.

Oil has never been a health food. There is still a common misconception among the public that olive oil (and other vegetable oils) are somehow healthy for the body, despite the fact it is the most calorie-dense nutrient deficient substance we consume and is heavily linked to weight gain and cardiovascular disease. Clearer instruction is needed on this pyramid level, as it is correctly limiting the consumption of processed fats, but not promoting the benefits from the healthful plant fats. Learn everything you need to know about fat here.

The Government guidelines on healthy eating are definitely a step forward from where they were previously. The recommendation of at least 5-7 portions of fruit and vegetables is an improvement on the traditional 5 a day. Refined sugar guidelines also heavily restrict the amount that should be consumed, and rightly so. However, they are still based on the food pyramid, itself a flawed model nearly entirely dictated by commercial interest. Nutritional science which repeatedly highlights the dangers of animal products and the endless benefits of fresh fruits, vegetables, legumes and nuts, is excluded as a result.

It cannot be either claimed or dismissed that these healthy eating guidelines were influenced by any external or commercial body. Factors such as bureaucracy, red-tape, politicking and other internal factors may also have had an effect. Blatant lack of awareness of the Food Pyramid Framework shortcomings is also highly likely. Unfortunately these guidelines, even with the Obesity Action Plan, will likely keep Ireland on course to be the most obese country in Europe. Given the growing body of research highlighting the negative health effects of dairy, meat and processed oils, (which are all recommended daily in the guidelines) the aim to "create an Irish society where everyone can enjoy physical well-being" will also not be met.

The next post will explicitly detail the optimum dietary framework ever conceived, which *spoiler alert* is a high carbohydrate, low fat, low protein, whole foods plant-based diet. In the meantime, please visit our resource guide to educate yourself on the optimal diet for physical well being, and feel free to forward it on to any persons in the department of health.