What Do I Eat on A Plant Based Diet?

What Do I Eat on A Plant Based Diet?

Knowing exactly what to eat on a plant based diet can be a minefield. Luckily, we have the "Daily Dozen" framework as created by Dr. Michael Greger, and presented in his 2016 book "How Not To Die". Dr Greger is the world's no.1 expert on diet and nutrition. He has read every nutritional paper published in every scientific journal released over the last 3 decades and created the Daily Dozen recommendations on the back of this research. Crucially, his organisation NutritionFacts.org, is run as a non-profit, and so unlike the Food Pyramid and other dietary guidelines, the Daily Dozen is not dictated by or even influenced by industry, lobbying, or any other commercial bodies. The Daily Dozen is introduced and discussed below. It is strongly recommended that one reads "How Not To Die," to increase their knowledge and gain a deeper understanding of nutrition & its role in health and disease prevention.

Food Pyramid vs The Daily Dozen

As discussed in the previous post, the traditional food pyramid framework for diet planning is not based on any scientific or dietary research. It was largely a marketing exercise undertaken by the US Department of Agriculture whose mission includes "the strategic marketing of agricultural products in domestic and international markets". The implementation of these guidelines caused obesity to skyrocket in the US. Despite this, it was then picked up and promoted in other countries as the go-to healthy dietary guidelines and is still the foundation on which the diets of western world countries are based. The food pyramid has been flawed since its inception, and promotes an unhealthy way of eating, despite claiming the contrary.

A dietary framework which recommends foods based on peer-reviewed scientific research (as opposed to commercial interest) should replace the existing view of healthy eating and nutrition. The "Daily Dozen" as created by Dr Michael Greger is the most nutritionally complete dietary guidelines ever conceived and should form the bases of all nutritional & healthy eating plans and education. He has compiled the mountain of data on plant-based eating and converted it into an actionable, day to day checklist of foods to consume. The recommended foods maximize a wide variety of nutrient consumption, along with exercise and water, to promote optimal human health. It is introduced with all of its elements below.

The Daily Dozen is, as the name suggests, 12 items to consume / partake in daily. It is in fact comprised of 10 food groups (beans, grains, berries, fruit etc.), a beverages category, and exercise as the final item. Vitamin B12 and Vitamin D are also included, as supplementation for both are necessary on a plant-based diet. Details of why supplements are unavoidable can be found here. Consumption of all 12 items almost guarantees (a post on organic vs non-organic nutrient content of food is coming) optimal intake of all essential macro, micro, and phytonutrients in sufficient quantities to maintain a healthy body and avoid common chronic western dietary & lifestyle diseases. It should also be noted that individuals with higher exercise levels or body mass may need to consume more of certain items to feel full or satisfied, and this will have only positive effects. The 12 daily items are outlined below, along with their recommended serving size: 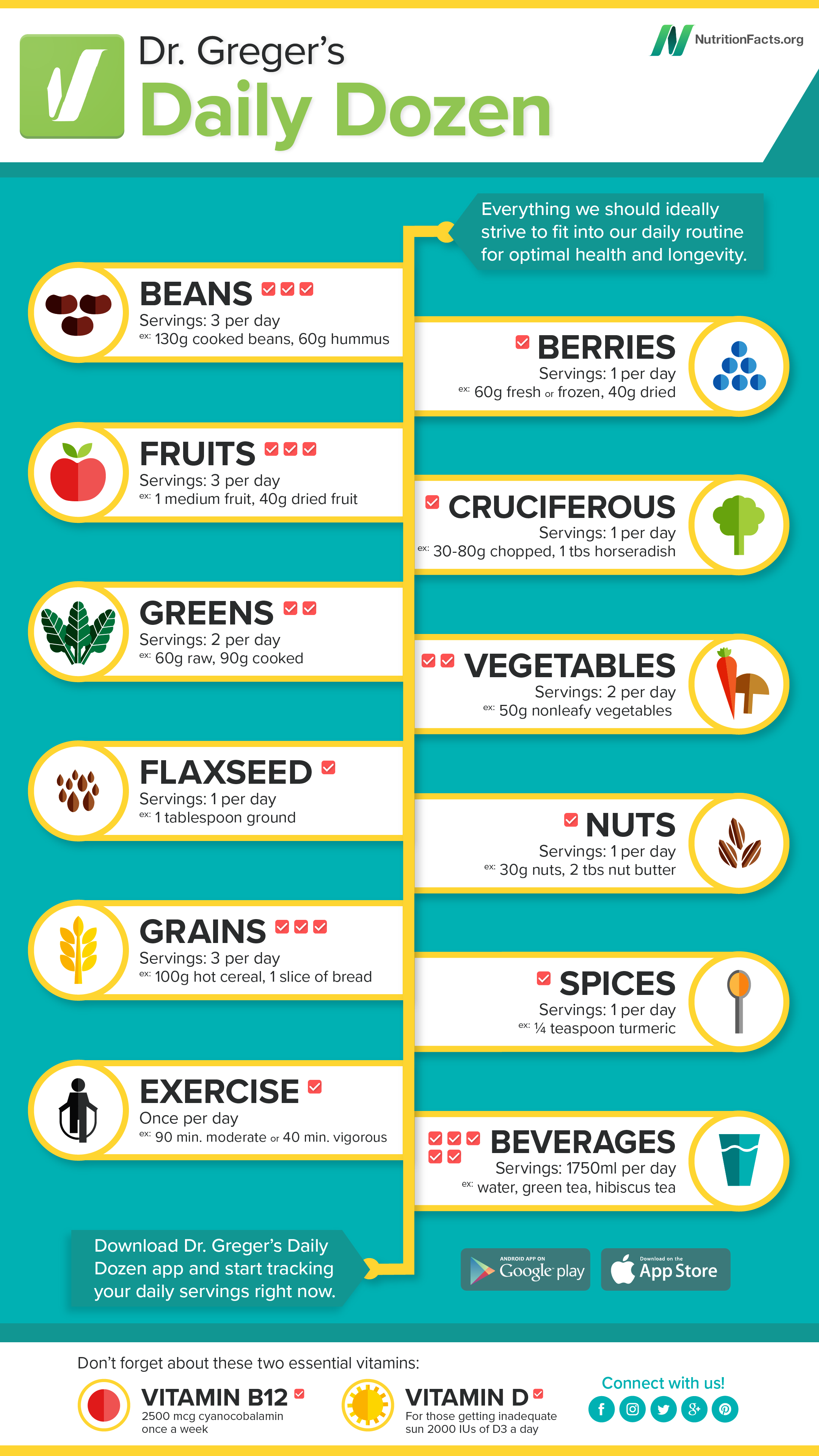 The Daily Dozen framework advocates consuming 17 portions of fruit & vegetables a day, along with water, exercise, and vitamins D & B12. This may seem like an unrealistic amount given that the current recommendation is 5 or 5-7 portions of fruit and vegetables daily. One should bear in mind that the original food pyramid was initially conceptualized by consulting nutritionists with a base of 9-11 portions a day, before lobbying & commercial interest reduced the recommendation to 5. Refined carbohydrates (such as white bread and pasta) and extra portions of animal products were positioned in their place. One may find the volume of food daunting initially given the high fiber and water content of these foods. Gradually adding items & increasing portion size is a reliable strategy for adhering to this framework.

Sustainable dietary change is achieved in a gradual manner. Begin by logging your existing plant-based consumption using the free Daily Dozen iTunes or Android app, and gradually add extra items over time. This will slowly push out the processed or junk items from one's diet, and one will feel the increasing benefits. The recently released "How Not To Die Cookbook" contains 120 recipes with the daily dozen food items as ingredients. If you struggle to get all 12 daily, do not be hard on yourself. Change takes time, and progress should always be sought over perfection.